Farmers Producers Organization is new generation cooperatives or u can say it is a hybrid cooperative graduating by amalgamation of positive characteristics of cooperative system and corporate model both. In 2002, the Government of India has amended Company Act 1956 and a new chapter IX has been incorporated in Indian Company Act which paved way to establish "Producers Company Limited" as a differentiated company of the farmers by the farmers for the farmers. Although FPOs can also be registered under Cooperative and Trust Acts but the degree of freedom under Indian Company Act, 2013 is found much more.
Primary producers‟ organisations or collectivities are being argued to be the only institutions which can protect small farmers from ill-effects of globalization or make them participate successfully in modern competitive markets (Trebbin and Hassler, 2012). Producers‟ organizations not only help farmers buy or sell better due to scale benefits but also lower transaction costs for sellers and buyers, besides providing technical help in production and creating social capital. In Mozambique, where 80% farmers are small holders and only 7.3% were members of any farmer organization in 2005, the membership in a farmers‟ organisation led to 50% increase in profits for small farmers from the crops handled by the organization (Bachke, n.d.). It is also argued that co-operatives or such collectivities are needed for small farmers as they help realize better output prices and credit terms and, thus, can help eliminate interlocking of factor and product markets into which small farmers are generally trapped (Patibandla and Sastry, 2004).

Accessibility of markets for agricultural and agricultural allied sectors inputs / produces by the farmers and farmers producers organizations is the biggest challenge for the sustainability of Farmers Producers Organizations (FPOs) due to strong inter-mediators playing in the field of agriculture and allied sector. Appreciable margins are being taken away by these players due to unorganized farmers. Hence, there is need to provide a platform to these FPOs to compete with these players. A FPO-GRID / F-GRID would provide a innovative platform for forward and backward linkages to the FPOs.

A FPO GRID would be networking of existing / newly formed FPOs within particular geographic locations. It may be a networks of FPOs within the State or in two or more States come together without graduating it into any higher level federation/s. 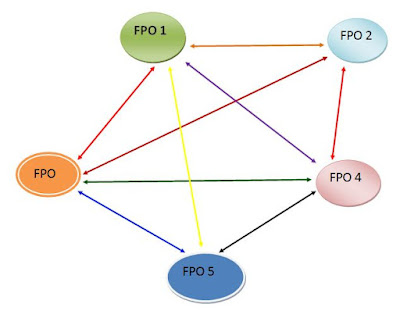 Example of Trading Business of other FPOs.

Actions Need to be taken :